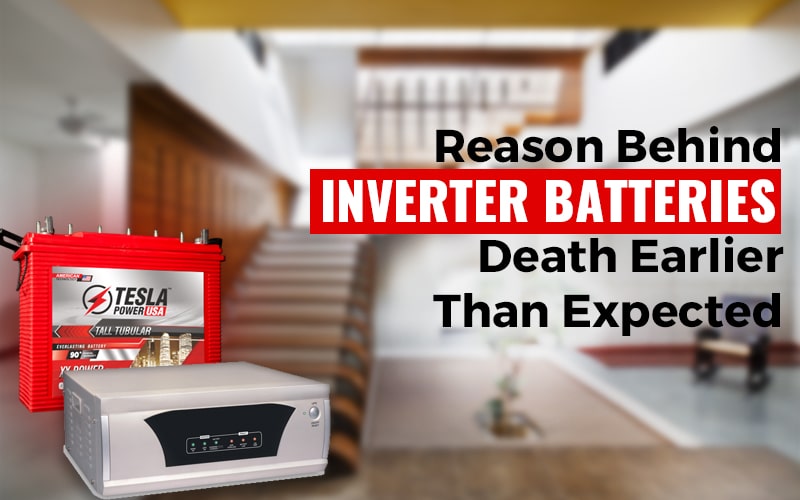 A battery is such an imperative part of an inverter, without which it cannot function. The performance of an inverter entirely depends on its battery. Hence, it is important to maintain regular care of a battery to keep it in a good situation for a longer period.

Some reasons due to which an inverter battery fails earlier than expected duration are discussed below:

Excessive Usage
The usage of a battery decides its life span as too much utilization may wear and tear the battery faster. Inverter utilizes the power stored in the inverter battery and supplies electricity during power failures. The more devices or appliances you use during power cuts, the more power will be sucked out of the battery, making them deteriorate faster.

Battery Charger Of Poor Quality
A charger charges the battery when the electricity is coming from the utility. So, it should be of good quality to extend the inverter battery life as a poor quality charger can destroy the battery faster.

Excessive Charging
If a battery is charged more than its requirement, it can lead to corrosion of battery plates that eventually results in premature battery failure. So, make sure not to overcharge a battery to keep its life worth going.

No Regular Maintenance
Lack of regular maintenance is one of the main reasons behind a battery failure. Poor maintenance leads to rust, corrosion, and dryness that are the biggest enemies of the inverter battery. The occurrence of rusts in terminals restricts current flow to and from the inverter battery, resulting in slow charging and reducing battery life. Additionally, a battery requires regular filling of distilled water, as a dry battery also leads to battery failure.

ELECTROLYTE LEAKAGE
It is important to check inverter batteries on a regular basis for any damage or fault as the electrolyte often leaks through cracks occurred in a battery and lack of electrolyte leads to battery failure.

Tesla Power USA has already won the hearts of all battery users worldwide with its designing ability. Tesla Power USA believes in delivering the best quality product for the wellness of its users, thereby offering inverter batteries that have a longer lifespan and offers better post-sales service.

Let Us Help You

Be at ease with Tesla Battery Warranty

Contact Us via email or our customer care number